There is one thing to be said about west Texas. There is nothing there but west Texas. Actually, the dry heat is a refreshing change from the humidity and rain of the Florida pan handle and New Orleans. Even though we did laundry last night in the motel, the sleeping bags and tents still had some rank dampness in them. All of which was gone within an hour of setting up camp by the river. 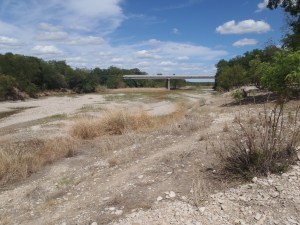 On coming into the camp grounds, the manager said that this is the worst drought they had seen in 75 years. The water restriction are that if the water is not for livestock or humans then don’t water it. Between our camp site and the dried out river bed is a signthat says: No Lifeguard on Duty: Swim at your own risk.

At some point today, looked at my right hand and the thought occurred to me: this guy is working overtime. Essentially, it has a firm grasp on a spring loaded throttle without let up for some four or five hours a day. The sun is out beating down on the hand and dehydration is the order of the day. Today, went through five fills of the water for the thermos of water and did not visit the bathroom once. The cup holder on the handle bars easily holds a 27 ounce thermos with a built in straw to drink from while on the road. Of course you can not drink with a full face helmet. The water only stays cold for maybe 20 minutes but then cold water is hard to drink.

A some point as I was coming out of San Antonio, I noticed that most of the cars were heavily tinted and the cocoon analogy hit me again. We as a species have evolved over who knows how many millions of years to be totally aware of everything going on around us. We had to be ever alert for threats to our survival. We were constantly processing sounds, sights, smells and who knows what else from our environment. We must have been very good at it because we outlasted almost everyone else.

Now comes the rub. In the last 200 or so years, mechanical marvels powered by electricity have enabled us to control our individual environments for the most part. That means we only have what we want and we essentially shut out whatever is unpleasant for whatever the reason. Temperature is a case in point. Somewhere the 68 to 78 range became the norm. So, huge functions of the bodies that are built around sweating and etc are put in check. Can’t help but think that the wisdom of our bodies is put on hold and we let our minds or thinking drive us.

Today, as I was going across Texas on I-10, I realized that I did not need a weather man to tell me the weather. I could feel the wind blow, the clouds in the sky, and feel the dryness in the air. My body automatically adjusted to each event with its own wisdom and there was no real discomfort. Yea, I smelled like a hog but then that is life. However, that is a very natural consequence of what I was doing. In the larger schema, we can go through the entire life depending on others to tell us what we should know ourselves.

The significance of this thought is mind boggling. What we are missing out on is the experiential learning curve of life and the ability to trust ourselves and the decisions we make. We have precious few reference points and little trust in ourselves once we leave our cocoons. Everyone is telling us how we should look, smell, think, feel and who knows what else.

Wonder if George Orwell was on to something when he coined the term Double Think No wonder everyone is in search of a guru of one sort or another to tell us how we should think, feel, emote, smell and who knows what else. The body is headed in one direction and the mind in another direction and we are going crazy trying to follow two masters.

Well, its dark and have enough water in my system to be hungry. No light in the camp sights and cooking is tricky in the dark. That is unless we go up the street to a local Catina and get what I am told are the best cheeseburgers in Texas.

This entry was posted in On the Road. Bookmark the permalink.