Closing out the trip to the Berkshires in New York.

I was totally exhausted after the third day on the ride from Florida to the Bershires by way of Cambridge. Just did not have the time or energy to keep a blog and as such made a couple of face book entries each day. There are a ton of things I had to relearn about myself as well as a lot of interesting things about the ride. No way to sort them out in any coherent fashion and as such just going to put them down as they come to mind and in not particular order.

If there is one thing sits on top of everything else is the snow and cold. I had to pull over on some highway in Connecticut to take this photo as my gloves were just too bulky to take a photo. Only saw one other motorcycle once I left Georgia and till I returned to Georgia. That was on the Mass Pike headed east as I was headed west into the Berkshires in New York. In many respects this was the ride of a life time that I would most likely never do again. However, given the opportunity to sandwich in a talk of women and children in the jails and prisons of the nation then this I would do as many times as required. 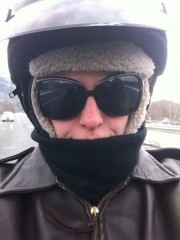 This Amber my co-presenter at the conference for Spirituality in Medicine (SIM) This may look like a costume but every inch of protection is need when the outside temperature is in the 30s and it is compounded by a wind chill factor of 60 and 70 miles per hour. She also took a lot of photos while riding as a passenger on the motorcycle from Cambridge to the Berkshires. 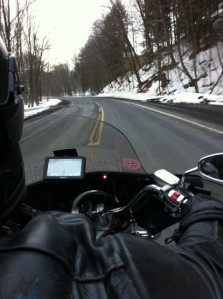 This is the film clip that Amber took while riding on the bike. Got to say, I lost a lot of the beauty of the ride once we got into New York because I was looking for black ice. However, much of the beauty comes back as I watch the film clip. We did dump the bike once on the trip because of the slush. It happened as we were inching out way out of the parking lot for the Cambridge Zen Center.  Don’t think anyone saw us as we were able to quickly lift the 800 pound bike bike and continue on our journey. Below, you can see the snow on the streets of Cambridge where to started the run to the Berkshires. 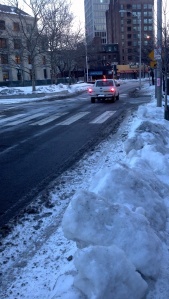 The roads where in good shape four days after the worst blizzard on record that hit Boston. The point to be careful on is to leave late enough in the day so that any snow that had melted on the day prior and turned to ice over night had a chance to melt again. It was only a three or so hour run from Cambridge to the Berkshires and so we left about noon. Complicating the equation is the amount of salt they throw on the roads. Where as it cuts through and melts ice it also cuts through and tears up metal on cars, trucks and motorcycles.Have given the Dragon Princes its first cleaning today but it will take a couple of more deep cleanings to get the salt out of the hard to get at places and rubber as well.

GPS are the bane of my life on the motorcycle. Think I went through maybe 8 or 10 of them on my ride to the four corners of the nation. It was in a Best Buy in South Dakota that a salesman suggested I get a generic Garmin with a two year warranty and then replace them as they go bad. I think I replaced three more on the ride after that. The GPS I started the ride with bad prior to getting out of the state of Florida.  However, there was no Best Buy and had to buy a new on in a truck stop in Virginia. Instead of using my PowerLet holder, mounted the GPS on the windscreen with its suction cup and it worked just fine up and back. Then when I returned traded in the broken GPS for a new one and now have a backup GPS.

So, here is a GPS story. While going across the George Washington bridge at the leading edge of rush hour my GPS lost its signal. The traffic was heavy, fast and uncompromising. Came out of the bridge and the GPS started recalculating. Hit the first turn and it was 95 percent done and had to move. With three choices, I took the wrong one and it started recalculating again and hit another turn which was wrong of course and the recalculation went on again and again. Finally found a place to pull over so the GPS could work through its calculations and ended up going on the Merit Parkway headed into Connecticut. What should have been an easy run to Cambridge turned into a nightmare.

The Merit Parkway is an old parkway with all kinds of twists and turns. It was rush hour traffic coming out of New York City and dark. I had been on the road for maybe 3 hours without a  rest and the temperatures were dropping down to the 30s and seemed like the 20s. Feet and hands were numb and don’t know that I could have performed any emergency maneuvers if I had to much less hold the bike up as my knees and ankles were not working well. Finally found a hotel to pull into in Stockton, Connecticut.

Had no real sense of how bad off I was until I tried to give a Dharma talk in the Cambridge Zen Center the following evening. I had a four or so hour ride to the Center the next day prior to the talk. During the talk, I could hardly string together two coherent thoughts. As Jane was answering questions, it occurred to me again just what was it all about. Then it hit me, life was in the journey and not the destination. The only destination in life is death when we come out exactly as we came in which is with nothing. I had the vision of the ending in the movie Citizen Kane where all of the goods Orsen Wells had accumulated in his lifetime were going into the furnace. Yep, I knew this but I attained it on a much deeper level.

You will have to double click on this photo to see the Dragon Princes (aka Snow Queen). She sat in the outdoors for three days. The temperature reached single digits and it even snowed. And then with grace and elegance, when the key was turned, she fired up without hesitation. No doubt she had visions of returning to Florida. There was a surprise I discovered at the gas station when I went to fill her up. The shield on the gas cap was frozen. Took a while to break it loose and then the second surprise was that the key way was frozen as well. Someone suggested I piss on it and after all these years doing programs in jails and prison no way was I going to do this in a public area on the interstate.

Am waiting for a photo to come through on the place we had the retreat. The place triggered some interesting thoughts. The retreat center was originally a Shaker community and was sold to the Sufi s in the 1970s. The reason for the sale was that the community ceased to exist. In part, was their core belief in celibacy. I guess the best testimonial to their convictions comes from their community closing.

Then there is a bigger question, what was it about the times that gave birth to so many Shaker communities in rural New England at the time that had celibacy as one of its core tenants. The buildings in the Shaker community are rock solid. They as the Quakers and other religious groups provided shelter for orphans. Can not help but think that one of the under sides of the colonies and early America was the abandonment of children. This was the underpinning of the Orphan Trains between 1853 and 1929. There were over 250,000 orphans moved out of the East Coast (mainly Boston and New York). The question that falls out of this is what was it in our nature in places like Boston that had such a profound religious/spiritual base that generated so many orphans. However, the questions of massive number of orphans left in the streets to fend for themselves has marked Mexico City, Brazil and Europe during the period that led up to the Children Crusades.

There is more to say and that will come later. For now I am just tired and head to bed.

This entry was posted in On the Road, The Journey. Bookmark the permalink.

1 Response to Closing out the trip to the Berkshires in New York.