Delivering a computer to Daytona

Did not want to get out of bed this morning. However, had a laptop from the Horizon Communities in Prison to deliver to a young lady that just started college and today was the only day in the visible future I would be able to do it and so it got done. In the process, I learned something about Daytona and Daytona College. It has one of if not the best outreach programs in the state that I am familiar with.

Anika got the computer and just in time as she had to catch up on the computer work associated with a hybrid course that combined distant learning and classroom instruction. However, the biggest surprise was the number of outreach programs totally unrelated to school work that were made available. Don’t think I have ever seen or heard of any one student get so much help in any way, shape or form in my life. A refreshing experience to say the least.

Just as refreshing was a find about half a mile away called the Star Light Dinner on Atlantic Ave.  Know full well and up front that I can not go past an old fashion dinner without checking out the quality of the dinner. This is a place that was like an oasis in the center of a community of condos that reached up to the sky. However, it has held its ground for over 35 years. And with such a track record, one has to go in and check out the quality of its hamburgers. 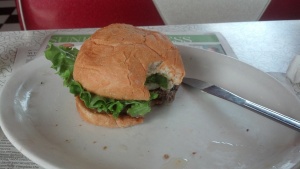 Anything other than a hamburger is a destraction and as such you see no french fries or related junk. I now understand how this dinner was able to hold its own against the onslaught of monied condos and high powered hotels and motels. I sensed it had class when I asked the cook who was on a smoke break if I was going to get towed by parking the motorcycle where I did and his answer was: how can they tow you when it is your parking space.

It always helps to have a hamburger in a dinner delivered by a bright shinny face that knows how to keep a coffee cup full. It was the end of spring break for Daytona college and this young lady had spent her break working extra shifts. As we chatted, it was a refreshing feeling to see kids that had a work ethic. Also, she was fully engaged in the world with work, education and  she could hold her own with the cooks. As I was paying the bill an extra hamburger came out and she said it was on them because she cancelled the order with a firmness that left no doubt she was not a person to be messed with. It is a good feeling to encounter kids that are engaged in life and will hold their ground. 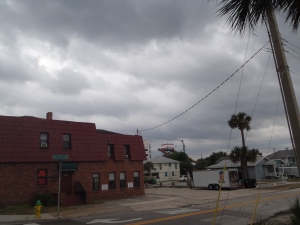 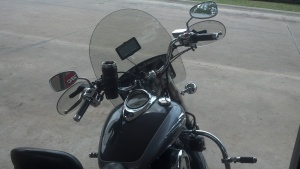 To make a run requires gas and coffee. So, I stopped at the last gas station prior to leaving Daytona. If you notice the Dragon Princes (aka Snow Queen) has changed her skirt. Actually, it was what she was wearing after the Gray Ghost was totaled in Rhode Island. If you look closely, there is a place where I can stuff a rag that is instantly available when I spill gas on the tank, wipe oil from the clutch that drips out of the air filter or clean my face when when i dribble coffee at highway speeds.

The wind on the way back gusted to about as strong as I have experienced for a long but long time. For those that have not noticed but what passes as farmland is nothing but colored sand the fact anything grows there is beyond me. The wind was lifting the grains of sand from the farmland and they were hitting me in the face like little pellets. I know you can not see the wind but trust me it was there. 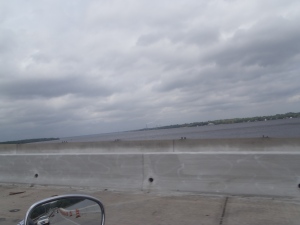 This photo was taken from the bridge headed into Palatka over the inland waterway. Hidden in the background are the stacks from two nuclear power plants. The thought occurred to me that there must be a better way to harness power that with nuclear energy. Just look at the raw energy in the clouds, rain and wind that is oh so much more vibrant and less destructive than a nuclear melt down.

This was a challenge that I was not able to resist. Going by the oldest dinner in the state. Drove by it but had to turn around and come back just to have a cup of coffee and sandwich. Normally, I have a western here but that was not on my menu for today. This is country and you need to know that the truck you are looking at is marked with a special logo that just grabbed my attention.

Know I had to go inside to try and figure out just who the owner of this truck was. Now mind you, this was a full size pick-up with and in your face challenge. Then again there was added glamor of walking into the oldest dinner in Florida.

Yep, it was an old dinner with precious little space for booths. The fixtures had to be the original ones and the only thing they were missing was lemon ma range or apple pie to go with the coffee. However, working the counter was some one that again gave me great hope for the young of this country. She was a nursing student that commutes to Jacksonville every day. It was refreshing to meet kids that had their feet on the ground, working, getting an education and fully engaged in life. The only thing missing in both dinners was a juke box at each table and spaced along the counter where you could get three plays for a quarter. My mind went into over drive as I visualized the Big Bopper singing:

As I was pulling out from the dinner, it occurred to me that somethings just don’t change and that is ok. It was a good and the four hours in the saddle delivering the computer to the kid in Daytona was a journey I would love to do every day.

This entry was posted in On the Road, Re-entry, Women and Children. Bookmark the permalink.

1 Response to Delivering a computer to Daytona