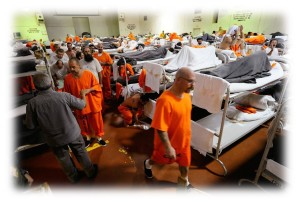 There are those that would say as goes California then so goes the nation. However, the supreme court has stepped in with:

Over the past quarter-century, multiple lawsuits have challenged California’s state prisons as dangerously overcrowded. In 2011, the United States Supreme Court found that the overcrowding had gotten so bad — close to double the prisons’ designed capacity — that inmates’ health and safety were unconstitutionally compromised. The court ordered the state to reduce its prison population by tens of thousands of inmates, to 110,000, or to 137.5 percent of capacity.

In January, the number of inmates was down to about 120,000, and Gov. Jerry Brown declared that “the prison emergency is over in California.” He implored the Supreme Court to delay a federal court order to release nearly 10,000 more inmates. On Aug. 2, the court said no. Over the furious dissent of Justice Antonin Scalia, who reiterated his warning two years ago of “the terrible things sure to happen as a consequence of this outrageous order,” six members of the court stood by its earlier ruling. California has to meet its goal by the end of 2013…..”

This will echo through out the country.

This entry was posted in Politics, Prison and Jails, The Journey, The Problem. Bookmark the permalink.